Lassell started a brewery business about 1825. He became interested in astronomy and, in 1844, began construction of a 24-inch reflecting telescope. 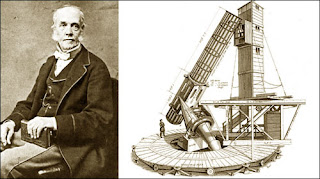 With this telescope, the first of its size to be set in an equatorial mounting, he discovered Triton on Oct. 10, 1846, only 17 days after Neptune itself had been discovered.

In 1848 his co discovered another satellite around Saturn, Hyperion with William and George Bond. Two years later Lassell made his first sighting of the dark inner ring of Saturn (called the crepe ring); he spent the entire night verifying the discovery only to find in his morning newspaper an article announcing the Bond’s discovery of the same phenomenon.

Lassell also discovered Ariel and Umbriel satellites of Uranus during 1851–52 while at Malta, and there in 1861 he erected a 48-inch reflector, which he used to observe and catalogue hundreds of new nebulae.

He died on October 5th 1880 in Maidenhead, Berkshire, England