This is probably the main northern autumn sky constellation. On maps Pegasus looks easy to find. Its four main stars make up a square and one might think it is easy to see. However none of these four stars are really bright and the square is also very large meaning that Pegasus is not that easy to find at first.

The ‘W’ of Cassiopeia makes a good pointer since a line drawn through Gamma and Alpha point towards Pegasus. The brightest star in the square is Alpheratz. For some reason this star has been given a free transfer to the neighbouring constellation of Andromeda. It has now become Alpha Andromeda which seems bizarre as it clearly fits in to the square of Pegasus. 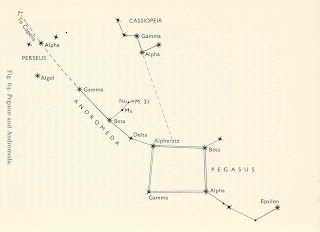 The most notable star Beta whose name is Scheat which means the horse’s shoulder and is an enormous red giant star around 200 light years away. The other stars that make up the square are Alpha which is called Markab which means saddle and Gamma which is called Algenib and means wing or side.

The square provides a good opportunity to show how uncrowded the night sky really is. It covers a large area, try to count how many stars you can see inside the square without using binoculars or a telescope. You might be surprised!

One last star to mention is 51 Pegasi which in 1995 was the first star similar to the Sun to be found to have planets orbiting it. The star which is of the fifth magnitude and just visible to the naked eye on clear nights is about 50 light years distant. 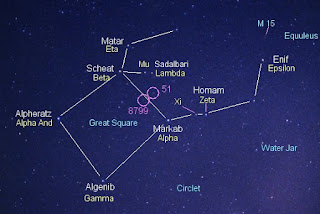 In mythology Pegasus carried Perseus to the rescue of the princess Andromeda who was about to be eaten by the Kraken. 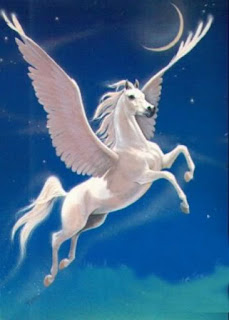