Astrognome Astronomy The Island of Sicily in the Night Sky

Triangulum (or the island of Sicily) 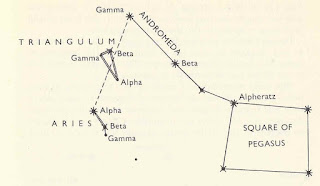 Below and between Gamma and Beta Andromeda lies a fairly bright triangle of stars which is called Triangulum the Triangle. It is unusual to find a constellation that looks like the picture it is supposed to represent but Triangulum is one of those few that does.

Its brightest stars are Beta at magnitude 3.1, Alpha at magnitude 3.6 and Gamma at magnitude 4.1. There is one important object in this constellation M33 the Pinwheel Galaxy. It lies between Alpha Triangulum and Beta Andromeda. It is face on to us and can easily be seen with binoculars. I am sure that people with good eyesight can see in from very dark sites. M33 is about 3 million light years away.

In mythology Pluto king of the underworld wanted to marry Proserpina daughter of Ceres . An arrangement was made whereby she would live six months of the year below ground with Pluto and the other six months above ground. As a wedding present she was given the island of Sicily which is represented in the sky as a triangle.

Beneath Triangulum is Aries The Ram.  This constellation was made famous by being the first sign of the Zodiac,  the point where the Sun’s yearly path amongst the stars cuts the celestial equator. Due to the shifting of the Earth’s axis this has now moved to the neighbouring constellation of Pisces. However the term “First Point of Aries “is still used today.

In Greek mythology, Aries represents the ram whose fleece was sought by Jason and the Argonauts. When King Athamus of Boetia took a second wife, Ino, she was resentful of his existing children, especially his son, Phrixus, and she wanted him sacrificed. Zeus responded to the pleadings of Phrixus' mother, Nephele, by sending a golden ram to save Phrixus and his sister Helle. Helle did not survive but Phrixus did and sacrificed the ram to Zeus and gave its golden fleece to King Aettes. The fleece was eventually stolen by Jason.
Posted by Astrognome at 07:37