William Bond was born in Maine in America on Sept 9th 1789. He co discovered the 8th satellite of Saturn, Hyperion and was responsible for some of the earliest astronomical photography. 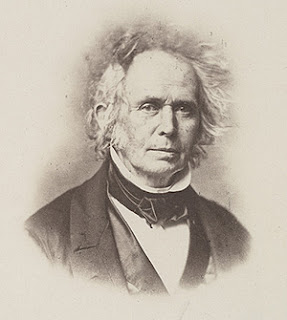 Bond was a watchmaker who became interested in astronomy after observing the total solar eclipse of June 16th 1806 which was total over America. He built a home observatory that was one of the finest in the United States at that time.

Bond independently discovered many comets, at one point he was the only American astronomer observing the Great Comet of 1811. In recognition of his efforts, he was appointed the first astronomical observer at Harvard College in 1839. He became the first director of the Harvard Observatory in 1847 and was elected an associate of Britain’s Royal Astronomical Society in 1849 the first American so honoured.

In 1848 Bond undertook extensive studies of the Orion Nebula and Saturn, and on the 16th September of that year he discovered Hyperion in collaboration with his son George Phillips Bond (1825–65). The English astronomer William Lassell independently discovered Hyperion the same night.

On July 17th 1850 the Bonds took the first recognizable daguerreotype (an early sort of camera) picture of a star, Vega the brightest star in the constellation of Lyra.

That same year, they discovered the dark inner ring of Saturn (the Crepe Ring), which Lassell discovered independently only a few nights later.

After William Bond died on Jan 29th 1859, his son George Phillips Bond succeeded him as director of the Harvard Observatory.