We have spent all summer watching the summer triangle but there are some smaller constellations which are worth watching before we go into autumn.

Let’s begin with Delphinus which might be small but it is easily found. It lies near Aquila and although there are no bright stars, they are easily found because they are close together and it looks like a star cluster. Many beginners have confused it with the Pleiades. 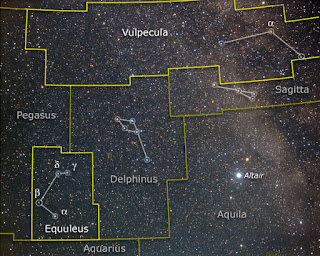 The stars alpha and beta have very strange names, alpha is Svalocin and beta is Rotanev. They were given by Niccolo Cacciatore an astronomer at the Palermo observatory in Sicily.  The Latinized version of his name is Nicolaus Venator, spell these names backwards and you will discover the names of Alpha and Beta Delphini.
Delphinus is an ancient Greek constellation and according to legend a long time ago a boat was sailing across the sea, on board was a musician called Arion, his music was so charming that a dolphin was a charmed by his music. Half way across the sea the ship’s crew robbed him and threw him overboard where he would have drowned were it not for the dolphin who rescued him. And for that good deed the gods decided to place a dolphin in the sky. 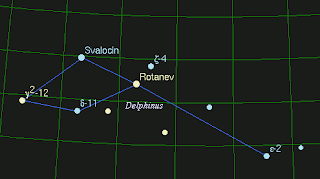 Equuleus
Our second small constellation is another ancient Greek constellation Equuleus the Little Horse or the Foal. It adjoins Aquila and Delphinus. In mythology it represents the foal given by Mercury to Castor one of the heavenly twins.
Equuleus is very faint and quite difficult to locate, none of the four main stars are very bright

Sagitta
The next small constellation is Sagitta the Arrow, a small constellation only the Southern Cross which is not visible from Britain is smaller. Sagitta lies north of Aquila. The stars although faint make the shape of an arrow.
Another of the ancient Greek constellations Sagitta was an arrow shot by Apollo against the one eyed Cyclops.

Vulpecula
The last of the small summer constellations is Vulpecula the Fox. It is not an ancient constellation; it was added to the sky in the late 17th century by the Danish astronomer Johann Hevelius. Originally it was called Vulpecula et Anser, The Fox and Goose, however the Goose has long disappeared.

There are no bright stars,  but the planetary nebula M27 the Dumbell nebula is in Vulpecula it has a magnitude of 7.5 it is just seen with binoculars. It is about 1,000 light years away.

In 1967, the first pulsar, PSR B1919+21, was discovered in Vulpecula by Jocelyn Bell at Cambridge. A Pulsar is the remains of a massive star explosion called a supernova. 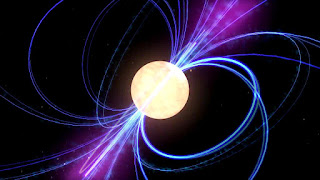