During October evenings the autumn constellations are at their best. Ursa Major, or the Plough, is to all intents and purposes at its lowest in the North. The ‘W’ of Cassiopeia is not far from the overhead point.

The summer triangle of Altair, Deneb and Vega remains high up. The southern sky is dominated by the Square of Pegasus. The bright star Capella in the constellation of Auriga the Charioteer is becoming more noticeable in the east. It will be overhead in winter evenings. 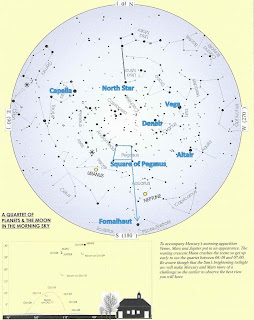 Although the four stars that form the Square of Pegasus are not the brightest, once found they will be easily recognised again. It is always an interesting project to count how many stars you can see within the square; you might be surprised by the result.

If you use the two right hand stars of the square and draw a line to the south you will reach a bright star very low in the sky. This star is Fomalhaut, in the constellation of Piscis Austrinus, the Southern Fish.

What’s up in the solar system?

The Planets in October
It is in the morning sky that all the action will take place this month. Around the 8th the very bright planets Venus and Jupiter, and the much fainter Mars, will form a large triangle in the sky before the Sun rises. Later, on the 26th, Jupiter and Venus will be very close to each other and make a spectacular sight in the sky before the Sun rises. Just for good measure, lower in the sky is the elusive planet Mercury.

Of the bright planets, only Saturn cannot be seen this month.

Meteor Showers
On the night of the 21st/22nd the Orionid meteor shower will be on display. Although not as spectacular as other showers, a few meteors might be seen. Meteors are the remains left behind by comets as they orbit the Sun. If the Earth passes through these remains we see lots of meteors, which we call a meteor shower. The Orionid meteors come from comet Halley.

The full moon in October is called the Hunter`s Moon. Following the Harvest Moon in September people living hundreds of years ago used the light from the moon in October to go out hunting to fill their larders with meat for the hunter.