Close to Gamma Cygni the central star of the northern cross lies a star which looks quite unremarkable, P Cygni. It is in fact a most fascinating star which varies in brightness. It was first observed in 1600 when it was of the 3rd magnitude, because it had not been noticed before it was classes as a nova which is Latin for new star. 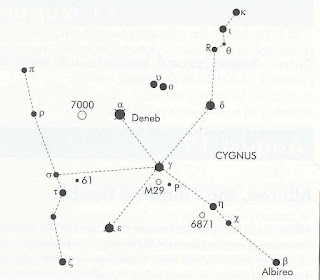 It then slowly faded and by 1620 was no longer visible to the naked eye.  In 1655 it was seen again and reached magnitude 3.5, however by 1662 it had faded from naked eye view again.

Since about 1715 it has varied between magnitude 4.6 and 5.2. P Cygni appears to be a very massive and unstable star. It is around 6,000 light years away and is about one million times as luminous as the Sun.

John Goodricke and Edward Pigott the fathers of variable star astronomy would have observed this star while working together in York between 1781-1786.

Cygnus is a constellation seen during the summer months with its brightest star Deneb being a member of the summer triangle. If you have binoculars it is worthwhile looking for P Cygni because although it has not changed in brightness very much over the last 300 years it might suddenly flare up and then disappear in a supernova explosion.

Although of course that might not happen for the next million years!