During the summer much time can be spent looking at the summer triangle of bright stars, Vega in the constellation of Lyra, Altair in Aquila and Deneb in Cygnus.
I would like to draw your attention to rho Aquila a 4.9 magnitude star in the constellation of Aquila the Eagle which is just visible to the naked eye on a clear dark night, although binoculars will show it easily. 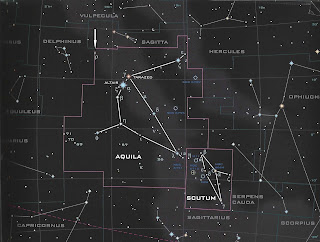 It’s an unremarkable star,  but it has a remarkable claim. In 1992 it moved from Aquila to the neighbouring constellation of Delphinus the Dolphin.

Rho Aquila is about 160 light years away and it is moving very slowly across the sky at a rate of 0.06 of an arc second per year. Since the star was catalogued as rho in 1603 by Bayer it has moved about 24 arc seconds across the sky and now is in Delphinus.
Of course the constellation boundaries are quite arbitrary, it’s not really significant. However if you want a good pub quiz question, in which constellation will you find the star Rho Aquila?