In the early 1960s NASA was attempting to obtain good close up photos of the lunar surface in preparation for the Apollo manned missions. Project Ranger was a series of unmanned probes that were designed to fly to the Moon then crash into the surface sending back photos right up until the moment of impact. 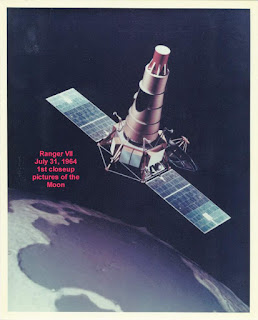 The first 6 missions which had started in 1961 were all failures. The first successful crash landing was Ranger 7 on 31st July 1964. The photographs were the best close up views of the Moon that scientists had received.

There was so much concern over the failure of earlier Ranger missions that the project had been dubbed project 'shoot and hope'. Following Ranger 7 two further successful ranger missions were launched to the Moon.
Posted by Astrognome at 05:54