Altair is the lowest of the three stars that make up the summer triangle. It is quite easy to find as it has a fainter star either side of it. Aquila is the brightest star in the constellation of Aquila the Eagle. 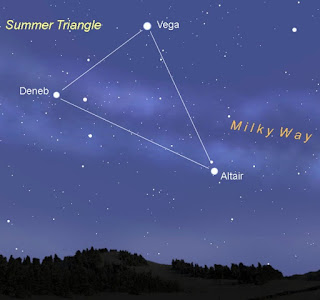 In mythology the eagle was sent from Olympus to collect the shepherd by Ganymede, who was destined to become the cup bearer of the gods. 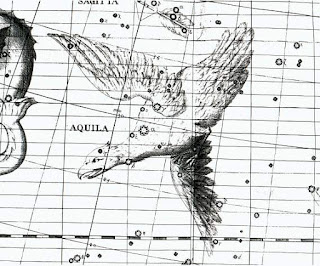 Altair is about 16 light years away meaning that light left the star in 1999. If you were born in that year light that left Altair will be entering your eye this summer. It is also the closest of the summer triangle stars. It is white in colour which means that like Vega it is hotter than our Sun.

South of Altair there is a line of three stars; the centre one eta which looks like a letter ‘n’ is the most interesting. It is another of the so called variable stars. It was discovered in York in 1784 by Edward Pigott who worked with John Goodricke who discovered the variability of several stars including that of beta Lyra. Both Beta Lyra and eta 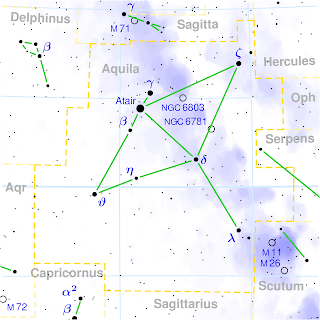 Aquila were discovered on the same night September 12th 1784. Goodricke and Pigott are the fathers of variable star astronomy.

Eta Aquila can be seen to vary in brightness around every 7 days.
Posted by Astrognome at 02:32