The Discovery of  Pluto's moon Charon

The New Horizons space craft is hurtling toward Pluto which it will reach next month it will give astronomers lots of information regarding this illusive little world , however 37 years ago something
quite amazing was happening.

The 22nd June 1978 was looking like a normal day for astronomer James Christy at the United States Navel Observatory in Washington D.C. with his family he was moving house at the end of the week, his boss gave him a simple job,  check some photographic plates of Pluto which had been deemed defective by astronomers at the Flagstaff observatory where they had been taken in April and May. Then Christy could get back to the serious job of moving house! 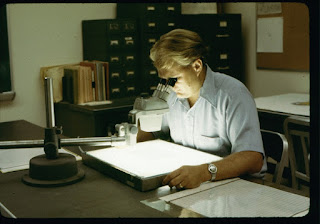 Christy noticed that there was something wrong, the image of Pluto should be round and there was an extension and it moved around Pluto. This wasn't a fault on the photographic plate this was a moon. A new body in the solar system.

This was a fantastic discovery, but can you image the reaction of his wife who is planning the house move waiting for her husband to help her when he tells her I have just discovered a moon orbiting Pluto and I will be busy for the next few days!! 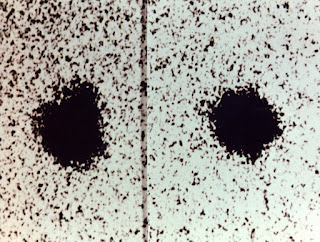 Charon is at the one o'clock position on the left hand image.

The story does have a happy ending because Christy was allowed to name his discovery and he called it Charon ( which in Greek mythology is the boat man who takes people across the river Styx from the land of the living to the land of the dead) which he pronounced "Shar-on" like Charlene his wife's name.
Posted by Astrognome at 02:54