September 3rd 1928 How a cold day and an open window changed medicine for ever with a wonder drug.

On a cool day Scottish bacteriologist Alexander Fleming  returns from holiday to discover piles of culture dishes with bacteria lying around, he left a window open in his lab, he notices that one of the dishes is contaminated with a greenish yellow mould . Fleming then notices that between the mould  and the bacteria is a clear halo where the bacteria had not grown. 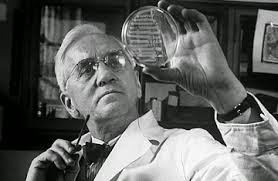 In a eureka moment he realises that the mould must be releasing a substance that is stoping the growth of the bacteria. Fleming names the active ingredient of his mould 'Penicillin' after the Penicillium notatum mould from which it comes.
Posted by Astrognome at 08:07