Strelka and Belka
On August 19th 1960 the first creatures safely returned to Earth  after being sent into space.

On board Sputnik 5 were two dogs Belka (which means Whitey) and Strelka (Arrow)  and there was also one grey rabbit, 42 mice, 2 rats and some flies that went up with them, all of which survived the mission too.  However it was Belka and Strelka that had the most publicity. 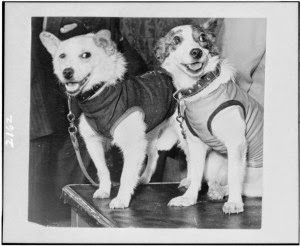 Both dogs were strays, both were female, Strelka would later have puppies and one Pushinka (Fluffy) was given to Caroline Kennedy, JFK’s daughter. This was of course at the height of the cold war.

Their mission paved the way for Yuri Gagarin in 1961 to become the first person to go into space.
Posted by Astrognome at 01:22