This is the oldest recorded variable star. It is a star that varies in brightness. It was first discovered by the Dutch astronomer Fabricius.  A few weeks later it could not be seen. In 1603 when the German astronomer Bayer was giving stars their Greek letters it was seen again and given the designation Omicron.

Astronomers now know that Mira is a star that appears and disappears fairly regularly. It has a period between being at its brightest of about 331 days. At its brightest it is easily seen but when at its faintest binoculars will be needed to find it. 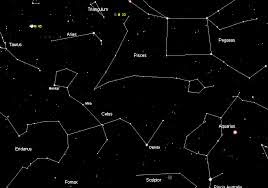 Mira is the prototype star of a class of large red giant stars that vary in brightness. These are called Mira variables.