August 10th 1972, Great Meteor that bounced off the  Earth`s atmosphere.

On August 10th 1972 a meteor was seen by thousands of people to entered the Earths atmosphere. It was travelling at a speed of about 15 km per second, at a height of 76 km it started to burn up and was seen over Montana in America. It came down to a height of 58 km before moving upwards and bouncing off the atmosphere. 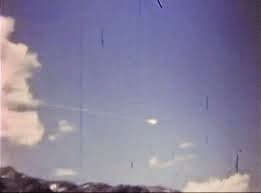 The object was very bright and could have been as big as 80 meters. This would make it bigger than the Tunguska meteorite of 1908 which destroyed over 80 million trees in a 2,000 square km area of Siberia.

It is presumably still orbiting the Sun
Posted by Astrognome at 07:30