It could have been an April`s fool joke but it was August. A series of articles published in the New York newspaper the Sun regarding the supposed discovery of life and civilization on the Moon. 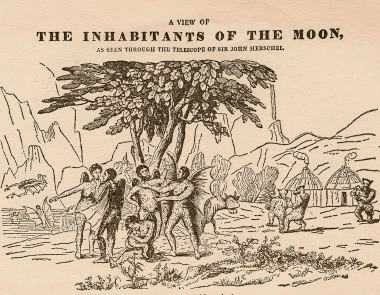 The discoveries were attributed to Sir John Herschel possibly the best astronomer of the time and son of Sir William Herschel who had discovered the planet Uranus in 1781.

Sir John was observing at the Cape Observatory in South Africa and was completely unaware of these stories. In the 1830s it took weeks for messages to travel from South Africa to America by sailing boat.

The stories told of fantastic animals on the Moon including bison, goats, unicorns and bat winged humanoids who built temples. There were also oceans, trees and beaches on the Moon. 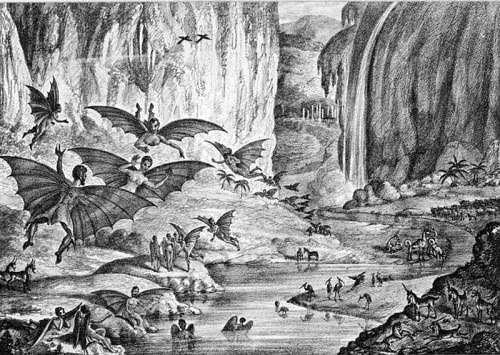 These ‘discoveries’ were made using the most massive of telescopes using entirely new scientific principles. The sales of the newspaper increased due to the stories. Eventually, the authors said that the observations had been stopped by the destruction of the telescope.

Apparently the Sun had caused the lens to act as a "burning glass," setting fire to the observatory. It would take several weeks before people realised that the stories were just a great hoax.

Even today it is unclear which of the Sun`s reporters were responsible. We know that at first Herschel was amused saying that more people were reading about him. However later he became annoyed at having to answer such silly questions from people regarding the Moon
Posted by Astrognome at 03:21