Nathaniel Pigott and the Great Meteor
On Monday August 18th 1783 a great meteor was seen in the sky not just over Yorkshire but all over Great Britain travelling from the North West to the South East.  Meteors are seen every August the Perseid meteor shower is on display.  However this meteor was not a Perseid.

At this time astronomers were unsure what meteors were, could they be caused by rising and igniting vapours, were they upper atmospheric electrical phenomena or solid bodies crashing into the Earth’s atmosphere?  What we do have is a wonderful account from an astronomer from York, Nathaniel Pigott the father of Edward Pigott who worked with the deaf astronomer John Goodricke in York.

Nathaniel Pigott writes that about it was about 9 o’clock in the evening and with 2 other gentlemen was riding to the East Riding when while on ‘Hewit Common’ about 3 miles from York the night sky was by flashes and sparks and a ball of light was seen traveling across the sky lighting up the dark surrounding. The head of the meteor appeared blue/white in colour the tail a dusky red.

A boom similar to a cannon firing was heard. Pigott assumed that the meteor might be about 40 miles above the surface of the Earth.

His full letter was read at the Royal Society in London on June 24th 1784.
Other reports from around the country confirmed what Pigott had observed, the height of the meteor being estimated at between 46-65 miles high. The meteor was in fact also recorded over Europe and travelled about 1,000 miles before being totally destroyed.
It is assumed today that the meteor was not very substantial and that there was some gas around the small object which burned off when the meteor entered the atmosphere causing it to become so bright. 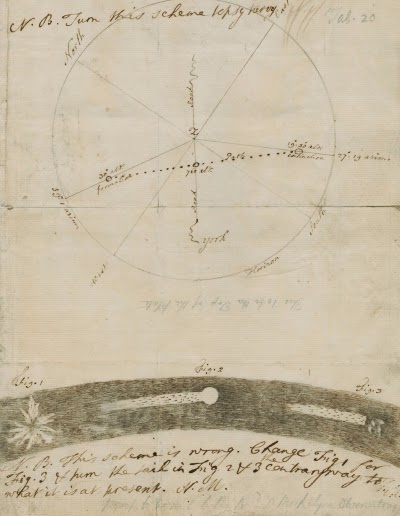 No trace of any meteorite fall was ever reported.
Posted by Astrognome at 01:46