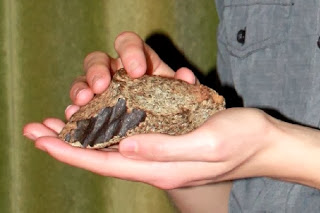 part of the Barwell Meteorite.

The biggest meteorite to land in Britain in recorded history; an L6 ordinary chondrite, it fell in pieces on the Leicestershire village of Barwell in England on Christmas Eve 1965. The meteor fragments hit buildings and even a car. When the fragments were put together, the Barwell Meteorite proved, appropriately, to be about the size of a Christmas turkey.
On This Day (2)
December 24th 1968
Apollo 8, First Manned Mission to the Moon. 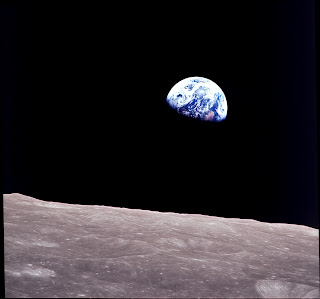 Earthrise seen from the Moon


Apollo 8 became the first manned mission to orbit the Moon, launched on December 21st 1968.  On December 24, 1968, while watching Earth Rise from the Moon  the crew of  Apollo 8 Bill Anders, Jim Lovell and Frank Borman read in turn from the Book of Genesis verses 1 through 10, using the King James Version.

Borman then said, "And from the crew of Apollo 8, we close with good night, good luck, a Merry Christmas and God bless all of you - all of you on the good Earth."