Biela’s Comet, named for the Austrian astronomer Wilhelm Freiherr (baron) von Beila (1782–1856). It was originally discovered by French amateur astronomer Jacques Leibax Montaigne in 1772. It was rediscovered by French astronomer Jean-Louis Pons in 1805 and was identified as the 1772 comet by German mathematician Carl Friedrich Gauss. When it was rediscovered again by Biela in 1826, he suggested that the comet could be the same as that of 1772 and 1805 and that it had a period of about 6.75 years. 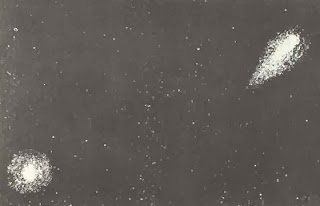 
Biela’s Comet underwent remarkable transformations; it was observed in 1846 to break in two, and in 1852 the fragments returned as twin comets that were never seen thereafter. They were missed at the 1858 and 1866 returns however at the next predicted return in 1872 the comet was again absent but an incredible meteor shower with several thousand meteors per hour was observed. 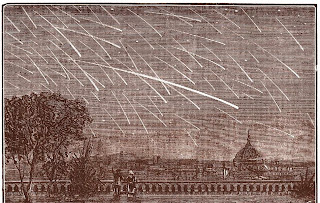 The assumption is the Andromedid meteor shower was the remains of the dead  comet Beila. These day only a few Andromedids are seen each year.