Comet ISON should be visible in binoculars and is about 3 degrees south of Gamma Virginis proper name Porrima.

The great Leonid meteor shower was seen on the night of November 12th/13th, it is estimated that 1,000s of meteors were seen every minute.

Reactions to the 1833 display are varied from the hysterics of the superstitious claiming Judgement Day was at hand, to the just plain excitement of the scientific community. 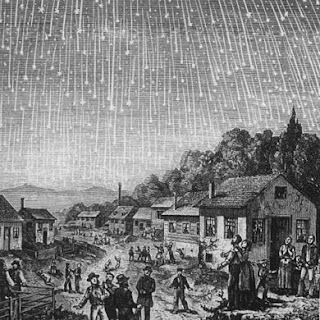 The day of Judgement, the Leonids 1833


At the time of the 1833 display, the true nature of meteors were not known for certain, but theories were abundant in the days and weeks which followed. The Charleston Courier published a story on how the sun caused gases to be released from plants recently killed by frost. These gases, the most abundant of which was believed to be hydrogen, "became ignited by electricity or phosphoric particles in the air." The United States Telegraph of Washington, DC, stated, "The strong southern wind of yesterday may have brought a body of electrified air, which, by the coldness of the morning, was caused to discharge its contents towards the earth."

Percival Lowell died, an American businessman, author, mathematician, and astronomer who believed that there were canals on Mars. He founded the Lowell Observatory in Flagstaff, Arizona. It was here that the search for Pluto would begin. Pluto would be discovered 14 years after his death. The choice of the name Pluto was partly influenced by his initials PL. 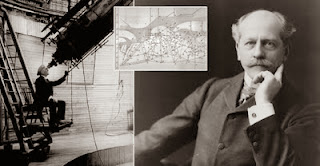 Lowell and the 24 inch telescope at Flagstaff, plus the 'Canals on Mars'