The planet Jupiter will be about 5 degrees above the Moon tonight at about midnight.

The alpha Monocerotid meteor shower peaks tonight, normally a weak shower it does appear to sometimes have outbursts. The meteor shower could be connected with the orbit of comet van Gent-Peltier-Daimaca (1944 I). 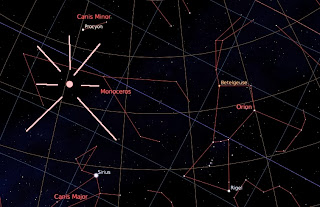 NASA successfully places in orbit 2 satellites by means of the same launch rocket for the first time in the agency`s history. The two satellites are Explorer 24 and 25