Einstein Observatory (HEAO-2) was the first fully imaging X ray telescope  put into space and the second of NASA`s  three High Energy Astrophysical Observatories. Named HEAO B before launch, the observatory's name was changed to honour Albert Einstein upon its successfully attaining orbit.

The Einstein Observatory satellite re-entered the Earth's atmosphere and burned up on March 25, 1982. 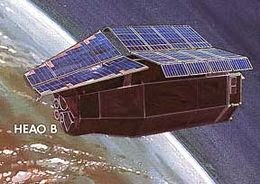 Tycho Brahe, who is said to have first viewed the comet slightly before sunset on November 13 after having returned from a day of fishing, was the most distinguished observer and documenter of the comet's passing.

Tycho saw the comet pass behind the Moon thus proving that comets were not atmospheric phenomena and existed beyond the Earth`s atmosphere.