A large Solar Prominence seen with a Cooke in India

On February 18th 1908 Mr Evershed at the Solar Physics Observatory, Kodaikanal, South India using a 6 inch Thomas Cooke & Sons telescope took a series of photographs of a solar prominence. The remarkable appearance of this kind of prominence has seldom been recorded. 20 photographs were taken with 14 being reproduced here. 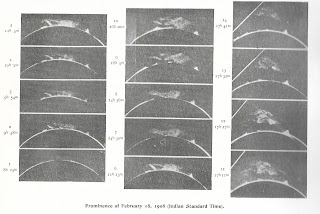