The following communication from Mr. Christie of the Royal Military Academy, Woolwich, contains probably all that can be yet known of this celestial phenomenon:—• “I first observed the comet," observes Mr. Christie, “last night (Saturday) a minutes before 11 o'clock, and judge that it came to the meridian about 12. Its elevation above the horizon appeared about 10°, and the sun being at the time nearly below, its distance from the sun cannot much exceed 25°. 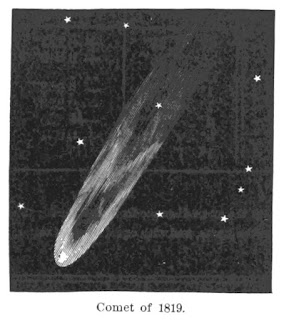 The night was remarkably light, and the moon uncovered by clouds—circumstances extremely unfavourable to the brilliancy of its appearance; and considering this, I should judge that, under more favourable circumstances, its splendour would be equal to that of any comet upon record—the head viewed with Capella (to the east of it) in brilliancy. The length of the tail, which, when the comet was on the meridian, pointed somewhat to the west of the zenith, extended about 15degrees; and unlike the comet of 1811, it appeared to proceed immediately from the nucleus.

I viewed it for some time through an excellent small reflector, by Watson, and observed, that the nucleus was much denser than that of the former comet, and that there was no separation between it and the coma, but that the body became gradually rarer, and in the upper part expanded into the tail; which appearance may arise from a very dense atmosphere surrounding the nucleus, and reaching to the rarer fluid forming the tail, if there be any distinction between the two fluids, as appears to have been the case with the comet 1811.

I may observe, that this as in all other comets, the appearance to the naked eye is much more striking and brilliant than through telescope. The Comet passed the meridian below the Pole, at the Royal Observatory, Greenwich, on Saturday, July 3, about midnight, when its place was determined as follows :

The Comet was again observed on Monday night (July 5), but not till it had passed the meridian, when the following observations was made :

This was comet 1819 also known as Trailes comet that was discovered on July 1st 1819 by the German astronomer Johann Georg Trailes. The comet was an easy naked eye object reaching between magnitude 1 to 2.