On Monday evening, in the lecture hall beneath the Orange Road Presbyterian Church, a lecture was delivered by Mr. W. E. Plummer, of Bidston Observatory" on "Comets and Meteors." 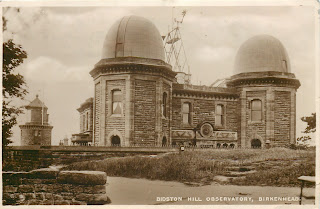 The lecturer managed to convey a vast amount of information to his audience, his statements being explained in the simplest language and further illustrated by lime-light views. After dealing with the theories concerning the formation of comets and their tails, he remarked that a study of these phenomena of the heavens was very valuable in the direction of the long sought problem as to the nature of the elements occupying space. He gave the history, briefly, of various comets and the extent of the parabola they described, and invited his bearers to keep their eyes open for one comet which appears within the range of vision once every 75 years and which can be next seen in 1911.

The lecture was deeply interesting, and a cordial vote of thanks was accorded to Mr. Plummer at its conclusion.