On Friday 31st October and Saturday 1st November evenings last Sir Robert Ball, the Astronomer Royal of Ireland, delivered two lectures at Rossall School on "Astronomy." There were large attendances, and the instructive and highly interesting discourses were greatly enhanced by numerous illustrations from a magic lantern, under the able management of Mr. B. Hainsworth. The subject of the first lecture on Friday evening was the San. At the outset Sir R. Ball alluded to the heat, size, and distance of the Sun, and its size in comparison with the other members of the Solar System, and proceeded to explain that it probably was not formed of any solid matter, but of flaming gas. The spots on the Sun were treated with, and described as holes in it’s surface, through which it was possible to see into the interior, and by means of which astronomers were able to ascertain the rotundity of the Sun. Pictures were shown illustrating total eclipses, and the stars which were to be seen close to the centre of our system, which at other times were invisible. 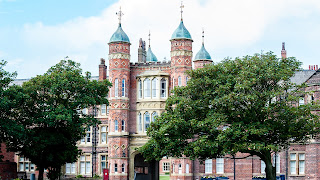 The second lecture dealt principally with the stars, and the lecturer explained how photography had to be adopted in discovering stars which were entirely invisible to the eyesight, aided or otherwise by the telescope. Photographs of the observatories in California and Dublin were shown, and in speaking of the vast distance of the fixed stars, which the Astronomer said were probably not single globes, but whole constellations, it was explained that the nearest one, Alpha Centauri, was twenty millions of millions of miles away from the Earth. In order to convey a clearer meaning of this vast distance to the audience, Sir R. Ball gave the following lucid illustration :—if electric telegraph wires were laid round the equator, a current would go round seven times in one second. If similar wires were laid to the Moon it would take about eight minutes, but if they were laid to the Alpha Centauri, three hundred years would elapse ere the message would reach that orb. The lectures of the eminent scientist were listened to with great attention, and were greeted with rounds of applause by the boys of the school.

The Headmaster, the Rev. C. C. Tancock, spoke a few words at the close and said that during the day news had been received that the Queen had granted the School a Royal charter. It would probably not make much matter to them individually, but it raised the school to a position that it had not held before. In honour of the grant. therefore, he would ask Mr Sweeting to play "God Save the Queen," and on the first fine afternoon he would give a half-holiday.