An Aurora seen from Halifax

An Aurora seen from Halifax

On January 3rd 1870 Joseph Gledhill while using the 9.3 inch Cooke telescope of Mr Crossley saw a spectacular aurora or northern lights. He stopped using the telescope to observe the aurora. 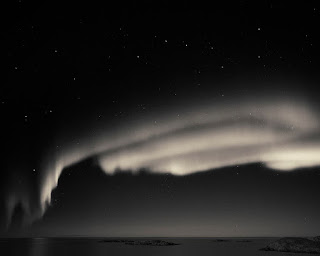 After a dull sunless, calm day the sky cleared at 5.00 pm. The display began at about 7.10 pm a broad band of light was seen across the front of the opening of the observatory dome. It was a dense luminous white beam with no colours being observed. It was about 5 degrees wide. At 7.30 pm the clouds covered the sky but at 8.10 pm the sky cleared and it was seen as a much broader although less luminous band being about 15 degrees wide. It could be seen lying from Beta Auriga through the belt of Orion to the Pleiades. By 8.30 pm no trace of the aurora could be seen.