Thomas Bauchope and a Cooke in Scotland

Thomas Bauchope and a Cooke in Scotland

Thomas Bauchope 1823-1889 was born at Brucefield in Midlothian, he succeeded his father as factor or property manager on several estates in Midlothian. His main leisure interest was in the sciences and in particular astronomy.

He had an observatory in his garden with a 4 inch Cooke telescope. His telescope is listed as a Cooke rather than a Cooke and Sons which suggests that the telescope is a pre 1857 model. He contributed a series of articles on astronomy to a local paper. He was known to try to encourage working class people to take an interest in either astronomy or another science. 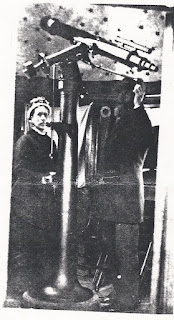