The 9 inch Cooke at Ochertyre

The 9 inch Cooke at Ochertyre

On December 11th 1858 Sir William Keith Murray (1801-1861) of Ochertyre near Crieff in Scotland purchased a 9 inch telescope from Thomas Cooke of York. The telescope was massive and had a tube that was 13 feet long and was mounted on a stone pier 9 feet and 3 inches tall. Up until this point in time it was the largest telescope that Cooke had constructed and it was also at the time the largest refractor in Scotland.

The weather conditions were often poor at the location of the observatory and Murray was only able to use the Cooke for a short period before his death in 1861. Following his death the telescope was offered for sale unfortunately with no initial interest. 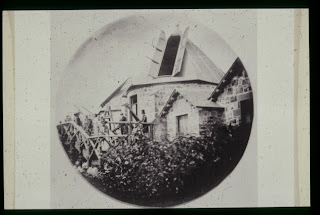 In 1863 a number of gentlemen raised £1,120 to purchase the telescope for the observatory at Glasgow University. It was sited at the Horselethill Observatory and used there until 1939 when the building was demolished. The 9 inch was always referred to as the 9 inch Ochertyre Telescope.

Following the demolition of the Horselethill Observatory a new student observatory was built in the University Gardens to house the 9 in Cooke. This was closed in 1969 after which I have no idea what happened to the 9 inch Cooke Ochtertyre Telescope.