Exhibition of the Phonograph in York

Exhibition of the Phonograph in York

At this time of year Christmas music is being played everywhere, but the first phonograph or record player as it would become known was not invented until 1877 by Thomas Edison. 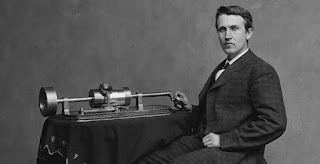 On the 17th December 1878 the first phonograph to be seen in York was exhibited at the Kenrick Rooms, Spen Lane I York by Messrs T Cooke and Sons. Permission had been obtained by Cooke and Sons from the London Stereoscopic Company who had purchased the British patent from Mr Thomas Edison the inventor.

The phonograph was explained by Mr Cox-Walker of Cooke and Sons. Briefly the phonograph consists of a brass cylinder, around which turns a spiral grove. The operator speaks into a mouthpiece upon a thin diaphragm, exactly like a telephone, to which a metal point is attached. The cylinder is covered with tin foil, and the point being in connection, and the handle turned while the operator is speaking, the point runs in the groove and makes a number of indentations in the tin foil corresponding to the vibrations of the diaphragm caused by the voice. On turning the reverse way the sounds are reproduced, the indentations in the tin foil, acting upon the metal point, causing the diaphragm to vibrate and communicate its motion to the air.

The singing is very distinct but the reproduced words of a speaker are somewhat thick, though the result is marvellous in the extreme. Two instruments were exhibited, one working by clock work and the other by hand. By the former the tone is reproduced more correctly, owing to the greater regularity in the turning of the instrument.