Y Cannes Venatici is in the constellation of Canes Venatici the Hunting Dogs, it's a variable star which varies between magnitude 4.8 and 7.3 meaning it can be followed when at its brightest with the naked eye and through its whole cycle with binoculars. It is what astronomers called a semi regular variable star reaching its brightest every 160 or so days. 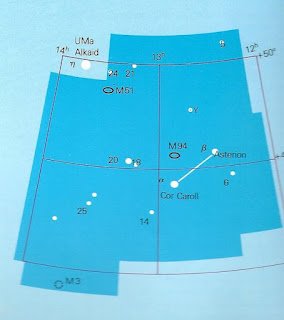 It is known as La Superba because it is one of a rare group of stars that astronomers refer to as carbon stars, these are stars very close to the end of their lives, La Superba only has a temperature of around 2,700 degrees making it one of the coolest known true stars. La Superba lies at a distance of 760 light years and is in the process of becoming a planetary nebula leaving behind its core which is a white dwarf. This is the eventual fate of our own Sun.

The name La Superba was given to the star in 1866 by the Italian Catholic Priest astronomer Father Secchi due to its very deep red colour.