Transit of Mercury seen from Australia with a Cooke

Transit of Mercury seen from Australia with a Cooke

On November 11th 1940 a transit of Mercury was visible for Britain that same transit was also visible from Australia on November 12th due to the different time zones.

A transit of Mercury occurs when the planet passes if front of the Sun as seen from Earth. Mercury can then be seen as a dark spot slowly moving across the Sun. Although not as scientifically important as transits of Venus, transits of Mercury still attract a lot of attention. The most recent was in 2019 the next will be in 2032. 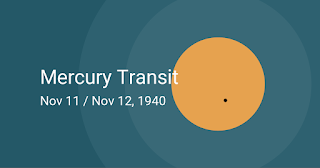 The Transit of November 12th 1940 was seen by Mark Howarth at the Grange Mount Observatory, Newcastle New South Wales, Australia. A Cooke 4.5 inch telescope was used with a solar diagonal of power x 80. Weather conditions were good, especially at times of the beginning and ending of the transit.

A slight haze made it impossible to obtain satisfactory photographs. The temperature at the time of the transit was 92 degrees F. or if you prefer 33 degrees C.