The Crossley Telescope and Nova Perseus 1901

The Crossley Telescope and Nova Perseus 1901

Early in the apparition of the new star in Perseus, short exposure photographs of it were secured using the 36 inch Crossley Reflector. The first long exposures were secured on the night on November 7th and November 8th 1901. The photograph exposure time was 7 hours and 19 minutes. It was developed on the 9th but due to stormy weather was not carefully examined until the 10th.

It was then compared with the photograph taken at Yerkes on September 20th which showed that several principal condensations in the nebula had moved. These facts were then sent to Harvard College Observatory. Further photographs were taken on the nights of November 12th and 13th with the Crossley Reflector and even in that short period of time the nebulosity had moved. 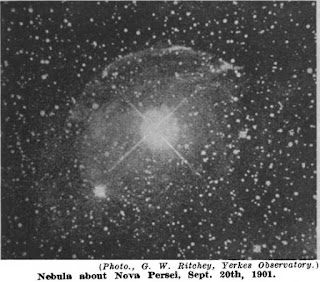 The Nova was discovered by T D Anderson on February 21st 1901. 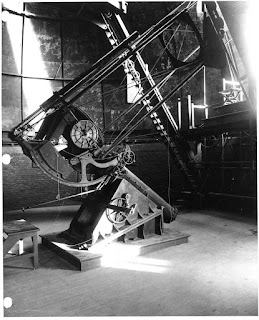 The Crossley Reflector which had been owned by Edward Crossley of Halifax, Yorkshire was donated in 1896 to Lick where it was used at the cutting edge of astronomical research in the early part of the 20th century.