Cooke Instruments were of the highest quality, But..........

Cooke Instruments were of the highest quality, But…….

Cooke Instruments were of the highest quality but by the 1920s with a slump in trade around the world for optical instruments Cooke’s were now discovering the penalty of making instruments too well, they did not need repairing!!

With this in mind in the late 1920s Cookes which by his time was trading as Cooke, Troughton and Simms undertook a major advertising campaign encouraging people who had brought equipment in the 19th and early 20th centuries to bring them back and have them repaired. This particular advertisement was from 1927. 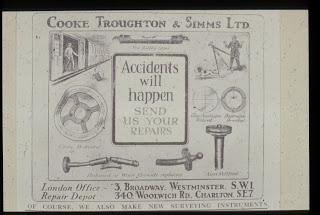 The campaign was not just in the UK it was also global, and senior salesmen were sent to the various Cooke offices around the world to try to drum up extra business. It worked briefly but sadly for Cookes and other major industries around the world the Great Wall Street Crash in 1929 signalled the beginning of the Great Depression in the 1930s and the demand for optical instruments ceased almost overnight..