A well known star, Rigel is part of the constellation of Orion which is marked by 4 stars that form a very prominent rectangle during the winter nights. Rigel is a blue supergiant star lying at a distance of 860 light years and shinning with a magnitude of 0.1. When people are trying to show the colour differences in stars they often use Rigel as a blue star in comparison with Betelgeux the top left hand star in the rectangle that forms Orion as a red star. 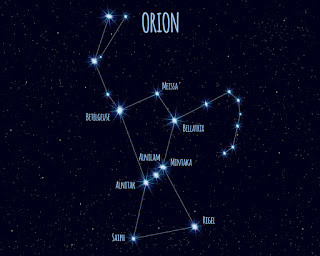 Rigel marks the bottom right hand point of this rectangle. Its name comes from the Arabic ‘The left leg of the Giant’. Although listed as beta it is in fact the brightest star in Orion. There are at least 4 stars in the Rigel system.

Rigel is estimated to be about 8 million years old. It has a surface temperature of 12,000 degrees however earlier in it’s evolution it would have been a massive 30,000 degrees. It is loosing mass at an incredible rate and like all giant blue stars it will like many of the stars that are in Orion end its life as a supernova.