Rho was first described as a variable star in 1901 when until 1946 it varied in brightness between 4.1 to 4.5 then unexpectedly in that year it faded to magnitude 6.0 it then returned to about magnitude 4.5. The same thing happened in 2000 and 2001. Checking back even further the same thing was recorded in 1893. There appears to be a cycle of events every 50 or so years. So what is going on here? 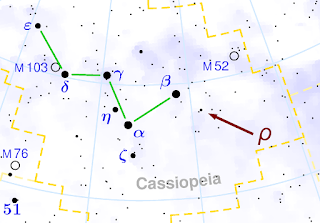 Rho is estimated to be around 8,000 light years away, stars are classed as either dwarfs or giants or even supergiants but rho is one the incredibly massive stars classed as a hyper giant. There may only be about a dozen known which include eta Carina and P Cygni. Even among hyper giants rho is rare as most are either red (cool) of blue (hot) but rho is in between it is a yellow hyper giant.

Rho has been classified as a massive luminous unstable star which is pulsating which is why we see the magnitude change and its loosing mass. In 2013 a shell of gas caused rho to fade in brightness by around half a magnitude. Then in 2017 rho brightened to magnitude 4.3 the it brightened again in 2018 this time to magnitude 4.2.

Rho is one of the most luminous yellow stars known, it is very close to what is known as the ‘Eddington Luminosity Limit’ . This is the maximum luminosity that a star can achieve where there is a balance between the force of radiation acting outwards and the gravitational force acting inwards. Rho does not have much time left before it becomes a stunning supernova.