Some ancient constellations are less well known than others. Lepus the Hare is one of those constellations. It can be found at the feet of Orion the Hunter, low in the sky in the south during winter evenings. Sometimes these quite often overlooked constellations have very interesting stars and this is the case in Lepus. Here we have the variable star R Leporis ‘The Crimson Star’ 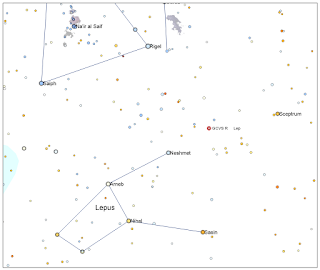 R Leporis was discovered by the English astronomer J R Hind in 1845 it is a Mira type red giant variable star. It varies between magnitude 5.8 to 11.7 in a period of between 418 to 441 days. R Leporis is called the crimson star because of its extraordinary colour. It has been likened to a glowing coal in a black sky. Hind’s crimson star makes William Herschel’s Garnet Star (Mu Cepheus) seem to pale by contrast.

So what contributes to the colour of the Crimson Star, first its temperature it is a very cool 2,100 degrees making it one of the coolest red giant stars known. However more importantly is the carbon which astronomers have discovered it the outer parts of the star’s atmosphere which then blocks out any blue parts of the visible spectrum we see coming from R Leporis. 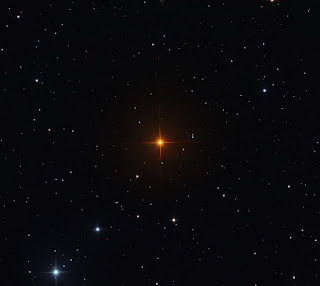 In mythology every winter evening Orion chases the Hare across the sky and every night the hare escapes ready for the chase to begin on the following winter’s night.