R Aquarius is at first glance an ordinary Mira type variable star which was discovered by Karl Harding in 1810, a red giant star and it varies between magnitude 5.2 to 12.4, at its brightest it is just visible to the naked eye while at its faintest a telescope is needed to see it. It varies over a period of 387 days. R Aquarius is on its way to become a planetary nebula. 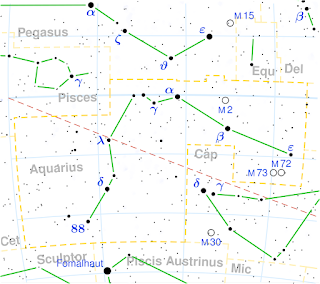 R Aquarius is however no ordinary Mira variable, it lies at a distance of around 700 light years and it is what is referred to as a symbiotic variable, in fact it is one of the closest of this kind of star. It is also known as a well known jet source. This is because R is not a single star it has a companion a white dwarf star. The white dwarf is pulling gas from R causing a prominent jet of material from the north east of the star to be observed and another jet projecting from the opposite direction. 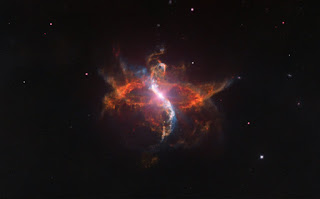 It is like a kind of nova system but the two stars are well apart it and the stars take about 44 years to orbit each other. It seems that this system can cause nova like outbursts and there are some suggestions that one such outburst occurred in 1073 and was observed by astronomers in Korea when a guest star was reported from the position of R Aquarius. The question is when will it happen again?