The first bright nova of the 20th century it was first noticed by Scottish astronomer T D Anderson on the 21st February 1901. It reached a maximum brightness of 0.2 on February 23rd 1901.

As the star faded from view there was an interesting account from Sir Robert Ball who said that on one evening he took a group of visitors to see the star only for it to have disappeared and was below naked eye visibility. A few nights later he took another group or visitors to show where the star had been only for it to be there again!

Four months after maximum it was still just visible to the naked eye. Novae Persei was not only the first bright nova of the 20th century it was the first of what astronomers referred to as the modern era. The star today is known as GK Perseus. 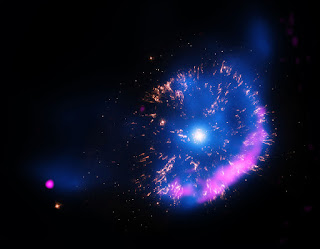 Almost 15 years after it was discovered the actual nebulous shell around the star was observed. Its presence had been known due to spectroscopic work undertaken when the star went novae. Similar shells would be photographed around Nova Aquila 1918 and Nova Hercules 1934.