Mu Columbae is the first known runaway star. Over the past 100 years astronomers have put an immense effort into knowing not just the distance of the stars but also how the stars are moving. However Oddballs stand out from the rest and Mu Columbae is one of the oddballs. 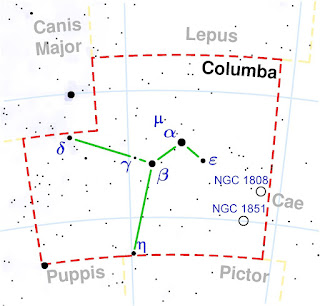 Mu Columbae and the star AE Auriga are two stars that are moving away from the constellation of Orion in almost opposite directions. To these two was added the star 53 Arietis. So what is going on?

When the tracks of these three runaway stars which are all hot O and B class stars are plotted backwards they reach iota Orionis a part of the sword of Orion and an area where stars are being created. 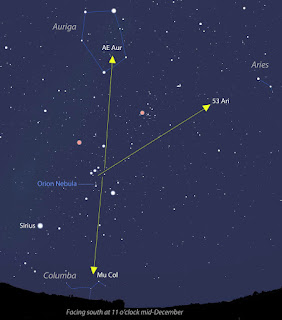 One possible explanation is that these stars like Mu Columbae which were all members of binary systems experience an event where one gets a violent kick to leave the system possible some kind of explosion. Another possibility is that random gravitational interactions among the members can accelerate stars, break up binary pairs and launch stellar bullets into the surrounding cosmos.

Both ideas are possible and astronomers are on the alert because an explosion such as a supernova could send a star in our direction.