On Wednesday November 27th November 1872 a large meteor shower was seen over the UK including a report from Birkenhead. Here is a report from G. H. H. of Birkenhead, I have no other details as to the identity of the observer. 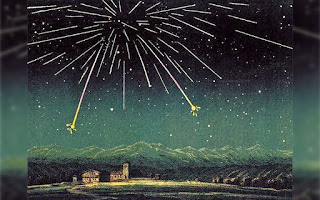 A very few among so many left visible streaks of light after the meteor itself had disappeared with 15 seconds being the longest time any of them remained visible.

They appeared to radiate from a point a little to the south of mu Cassiopeia, many in the vicinity of that star having courses of less than one degree in angular measurement.

Towards 10 pm clouds covered the greater part of the sky, so that only unusually brilliant meteors could be seen; They were however, again visible but in decreased numbers at 11.30 pm.