The first variable star to be discovered was omicron ceti or Mira in the constellation of Cetus the Whale in 1596. We know today that there are many red giant stars that fall into the class of variable stars that astronomer refer to as Mira type variables. IRC + 10 216 is an extreme member of this class. 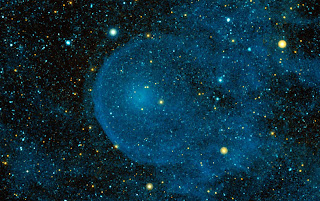 It is effectively invisible to the eye no one even knew it was there until 1969 when it was found to be a very bright infrared source in the sky. Its actually a huge cloud of dusty gas abut 1.5 light years across lying at a distance of about 500 light years. Buried within it is the variable star CW Leonis a cool Mira star with a temperature of only about 2,300 degrees. However where Mira has a period of 331 days CW Leonis has a much longer period of 649 days.

IRC +10 216 is studied by infra red astronomers rather than optical astronomers and the star is loosing its mass at a rate of 0.00002 solar mass per year. The star will eventually loose all of its gas, form a planetary nebula and end its life as a small white dwarf star.