The claim to fame for Gamma Draconis or Eltanin which means the Great Serpent and is a star lying at a distance of 150 light years and shines with a magnitude of 2.2 is in its position. 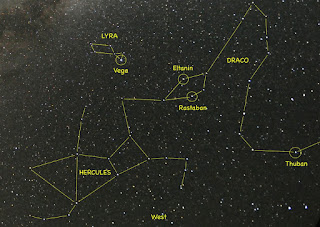 Eltanin is the closest star to the ‘winter side’ of the ‘solsittial colure’, (this is the circle in the sky that passes through the celestial poles and the solstices) lying almost 75 degrees north of the winter solstice in Sagittarius. Eltanin’s high northerly position of 51.5 degrees north of the celestial equator takes it through the zenith, the point overhead as seen from London.

In the 1700s London was a centre for the measure of precise stellar positions. One of the major problems in establishing them is the refraction of light caused by the Earth’s atmosphere. A star that passed overhead was required hence Eltanin. The star seemed ideal to use in the search for parallax and therefore distance. 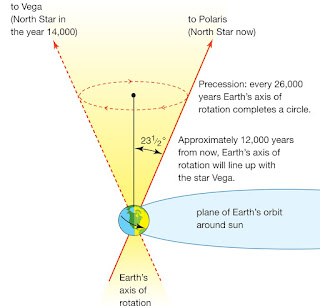 The observations made in 1728 by James Bradley showed that the star was shifting as a result of the movement of the Earth. Bradleys observations showed that there was a 26,000 year axial wobble or precession on the Earth and that changes to the pole star and the visibility of the constellations.