Beid and Keid, unrelated stars meaning ‘the egg’ and ‘egg shells’ in Arabic carry the same Greek name omicron Eridani. We call Beid omicron 1 and Keid omicron 2 though astronomers know them better as John Flamsteed’s 38 and 40 Eridani. We don’t need to worry about 38 Eridani our target is 40 Eridani. 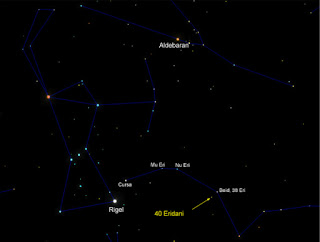 40 Eridani shines with a magnitude of 4.4 and is a K0 class star cooler than the Sun and lies at a distance of 16 light years. There are two companion stars Eridani 40 B and C which were discovered by William Herschel in 1783. Eridani 40 B is a relatively unimportant K class star with a magnitude of 9.5 meaning that you would need a good pair of binocular or more likely a small telescope to see it.

40 Eridani C on the other hand is far more interesting. It is a magnitude 11.2 white dwarf star. Although Sirius the brightest star in the sky has a while dwarf companion star often referred to a ‘the pup’ is closer than 40 Eridani it is much brighter than the pup making it very difficult to study. This is not he situation with Eridani 40 C. It is the easiest white dwarf star to study.

At one time this white dwarf star would have dominated this triple star system before evolving into a giant star before ending up as we see it now as a small white dwarf star at the end of its life.