Eta is among the most distant stars that we can see with the naked eye. It lies at a distance of around 7,500 light years. There is evidence to suggest that a 4th magnitude star located in the position of eta was recorded by the Dutch astronomer Pieter Keyser. In 1603 Johann Bayer who labelled the 24 brightest stars in each constellation with a Greek letter labelled this star as eta Argus. We must remember that the constellation of Carina was one part of the giant constellation Argo Navis. 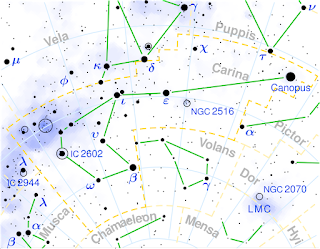 Eta was seen as a star of magnitude 4 until around the late 1820s when it brightened and by the 1830s was recorded at magnitude 1.4. John Herschel noticed that on December 16th 1837 it had brightened to magnitude zero. Then between 1838 and 1845 eta brightened several times to reach magnitude -1.0 being only slightly fainter than Sirius. 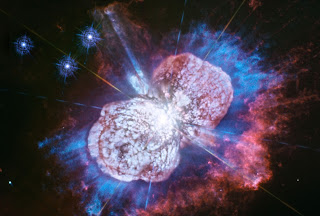 By 1886 it had faded to below naked eye visibility which is set at magnitude 6.0. During the 20th century eta has brightened again to reach a magnitude of around 4.5.