September 10th 1784 A Night to Remember in York

John Goodricke and Edward Piggot formed an unlikely alliance when they met in York in 1781, because for 5 short years they would make York one of the astronomical centres of the world. Through their observations of the night sky they would earn the title of ‘The Fathers of Variable Star Astronomy’ 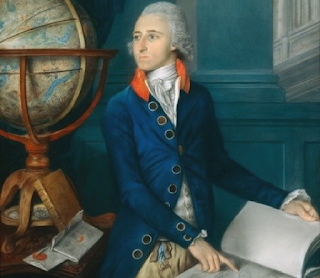 John Goodricke was deaf and unable to speak and Edward Piggot who dressed in a very flamboyant style knew everyone worth knowing in the world of 18th century astronomy.

They had already observed and explained the light variations of beta Perseus or to give its name Algol, or the winking demon, they believed that there were two objects orbiting each other causing the regular light variations. This idea is used by astronomers today when they are looking for exoplanets around other stars, Goodricke and Piggot were nearly 250 years ahead of the game.

If they contributed nothing else to astronomy there achievements would be immense. Yet it was on the night of September 10th 1784 that a series of amazing discoveries would be made, up until this date only 5 variable stars were known to astronomers.

Yet on this night in York, Edward Piggot would discover the variability of eta Aquila which astronomers now recognise as a Cepheid variable , these are stars that astronomers use to work out the distance to other galaxies. The prototype Cepheid, is delta Cepheus which was discovered, yes you guessed it by John Goodricke .

A few hundred yards away from Edward Piggot in York John Goodricke had just discovered the variability of beta Lyra which would become the prototype of this class of stars. This is a system of 2 stars that are so close together that the gravitational pull of the stars pull them out of shape from a spherical to an ellipsoidal shape. Goodricke would be totally unaware of this.