Eton School and a Cooke

In 1870 one of the masters possible H G Madan at Eton School decided that they would provide a telescope. They chose a 5.9 in Thomas Cooke & Sons Refractor. The observatory was also made by Cookes. The observatory was erected on the roof of the western tower of the New Schools. It is square and surmounted by a revolving dome. 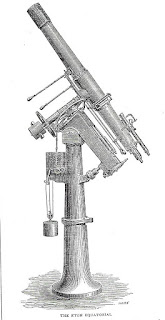 Although a telescope on a roof will never be completely free from vibration it is reduced to a minimum by supporting the telescope on two massive trussed iron girders stretching across the observatory. The floor is supported quite independently.

The telescope which was up the normal Cooke standards was supplied with the new Cooke clockwork driving system which was designed by the late Thomas Cooke.

The science master at Eton School was H G Madan who was the brother of Falconer Madan who was himself the grandfather of Venetia Burney who suggested the name Pluto for that newly discovered planet.

I believe that the Eton telescope is still in use today in a different observatory located next to Eton Golf Course and is used by the Herschel Astronomical Society.