Cookes and the Mayflower

Cookes and the Mayflower

Scientific Instruments made by the York based company Cooke Troughton and Simms were sent across the Atlantic Ocean on board the Mayflower 2.

The Mayflower 2 sailed on April 20th 1957 from Plymouth in Devon replicating the original voyage of the Mayflower in 1620. The Mayflower 2 arrived in Plymouth Massachusetts on June 22nd 1957 and was then towed to New York City on July 1st 1957. 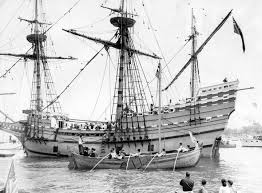 The instruments were placed in a treasure chest where when it arrived in New York City was greeted by President Eisenhower. It then became a tourist attraction with its treasures including the Cooke Troughton and Simms instruments being seen by tourists.

The instruments which were inscribed to commemorate their method of transport will eventually be taken by the company’s representatives in the cities of Boston, Chicago, and the states of California and Colorado.