Discovered on the 21st July 1903 by M Borelly at the Marseilles Observatory the comet would become an easy naked eye object at magnitude 2.5 it was observed until August 24th when it became to close to the Sun to be seen.

Isaac Roberts at Crowborough, photographed the comet the top and bottom photographs of the comet were taken using his 5 inch Cooke telescope while the middle one was taken with his 20 inch reflector. 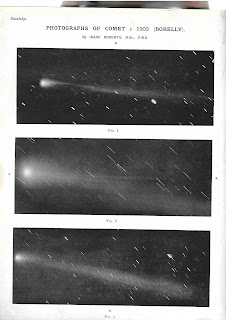