Alpha Ursa Majoris or Dubhe is the northern most of the two pointers that indicate how to find the North Star. Although designated alpha it is actually the second brightness star in the constellation. The name Dubhe means the ‘Bear’ in Arabic. 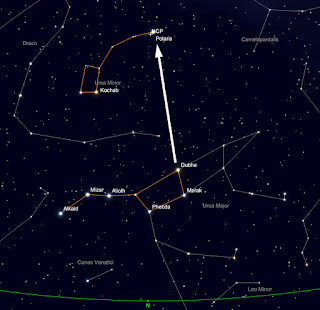 Dubhe has a magnitude of 1.8 and is a K0 orange giants tar with a temperature of around 4,600 degrees lying at a distance of 123 light years. Dubhe is not part of the Ursa Major Moving Group of stars which consist of 14 stars of which 13 are located in Ursa Major.

Dubhe has a close companion star which orbits around it every 44 years but its a very difficult star to see without a large telescope. Dubhe has been suspected of being a variable star. In 1867 the German astronomer H J Klein thought the star showed changes in colour from reddish to yellow. In 1881 it was suggested that the star varied in brightness with a period of 54 days. Today astronomers believe that any light variations are very small indeed.